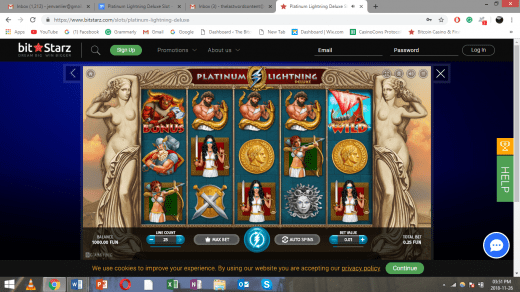 This amazing slot title was released by BGaming in 2018 and an update was provided in June 2019. The theme of the slot is Greek mythology and a few of the Greek gods play a part in this exciting advancement. BGaming has been at the forefront of Bitcoin gambling in terms of their slot offerings and numerous titles developed by their team accept both Bitcoin and various altcoins such as Dogecoin, Litecoin, Ethereum, and a few more.

Platinum Lightning is a 5 reel slot title that has 3 rows and 25 pay lines. The astounding graphics and cards are exactly what a title such as this needs to stand out. The cards have been perfectly executed and the graphics are exactly what players require from a historical slot. The slot does not offer a progressive slot feature unfortunately however players will enjoy an astonishing 96.3% return to player.

This title has amazing characters that have been brought to life. The immense power of the Ancient Greek Mythology bangs onto the player’s screen with BGaming’s strong slot title. The update to this amazing title was dubbed the Deluxe version.

Players can jump into the reels set out in the Greek ruins. The main characters in this fantastic world are Medusa, Lady Justice, Poseidon, the greek galley, Zeus, the Monitaur, and Hercules. The amazing title has an awesome soundtrack that plays in the background and adds to the greek atmosphere. This BGaming offering is a provably fair slot option.

The reels are set within the Greek ruins and gorgeous statues hold them in place. The return to player is an exciting 96.3% which is some of the highest out there.

Zeus is the all-powerful scatter and a combination of 3, 4 and 5 lightning Bolts multiply winnings by x7, x77, and x777. The Greek Galley is the ancient ship of the slots and works as the Wild. The ancient Galley can replace any symbol on the board except the almighty Zeus. The Wild symbol can replace any symbol except for the Scatter. This will maximize wins by the x88, x888, and x8888 as well.

The Minotaur is a ferocious addition to the reels which acts as the bonus. When appearing on reels 1 and 5 this mystical beast will trigger 10 free spins. These free spins of the gods can double the player’s winnings up to 5 times. The maximum win which can be received on this title is 8888x which is mighty impressive much like the rest of the slot and theme.

The gameplay is simple and even novice gamblers can easily pick up play within the demo feature which is provided. The title does also offer autoplay so players can let the slots ride in an automated function or they can play manually.

Platinum Lightning Deluxe has perfectly captivated the theme of Greek mythology and the Greek Gods. This amazing Bitcoin gift from the Greek Gods ( and BGaming) is full of great features and super lightening deluxe wins! With a perfectly executed theme and features, this is definitely a winner for Bitcoin sot lovers! With the upgraded release of the Deluxe version this slot just keeps getting better and better!