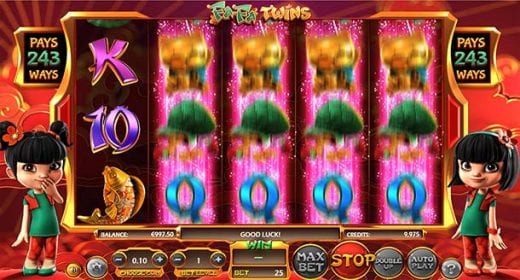 Keen slot players will have noticed the steady increase in popularity of games based on East Asian culture. It’s virtually impossible now to visit an online casino without coming across at least one slot which revolves around dragons, anime characters, geisha girls or Chinese lucky charms. Betsoft has decided to join in this trend with the Bitcoin slot game; Fa Fa Twins. Released in February 2017, Fa Fa Twins follows the antics of two adorable, identical little girls who have been drawn in the immediately recognizable anime style. There’s no doubt that Fa Fa Twins is a nicely designed game with a quirky theme, but has Betsoft’s decision to forgo traditional scatter bonuses in favor of a duplicating reel and a gamble option paid off? Keep on reading to find out if this Bitcoin slot stands out from the many others with similar themes.

Fa Fa Twins is laid out in a five reels, 243 ways to win format. The betting range is wide enough to attract a number of players as spins can be made for as little as 50c or as much as $125. Setting this wager is simple enough; all it requires is for players to adjust their coin value and bet level using the plus and minus symbols below the reels. Once the stakes have been set, players have the option of hitting ‘spin’ or ‘auto-play’ to make the reels roll continuously for a fixed amount of spins.

So far, none of this is particularly different from most other Bitcoin games out there, but where Fa Fa Twins does manage to shake things up is in the Dual Reels feature. The way this works is simple; a green layer will appear over two reels at the start of each spin, the green tint is an indication that the reels share identical symbol placement – a perfect feature for a slot based on a pair of twins! This, of course, greatly boosts the chances of landing a big win and is made even better by the fact that the Dual Reels can potentially spread to other reels until all five are filled with matching icons. If a winning combination is hit upon, the reels are lit up with some nice fireworks animations.

Unfortunately there are no bonus rounds or special features which will make a substantial difference to players’ winnings here. The only extra feature on offer is the gamble option. This has become quite a staple in Bitcoin slot games so will be familiar to most people who play Fa Fa Twins. After each winning spin, players will be presented with the option of risking their winnings by guessing whether a virtual coin flip will land on heads or tails. Get it right and the funds from the win will be doubled but a wrong guess will result in a total loss.

From just one glance, it’s clear that a huge amount of effort has gone into ensuring that Fa Fa Twins is an exciting, vibrant game. This Bitcoin slot has a fun-filled theme and is interesting to play. In many ways Betsoft has succeeded in making the game stand out from its similarly themed competitors. However, since the highest payout up for grabs here is 810,000 coins and there are no free spin bonuses to play for, high-rollers will be hard-pushed to come across any seriously satisfying cash prizes. Fa Fa Twins is a game to enjoy for fun and small wins rather than massive amounts of money. So anyone looking for a Bitcoin slot to play for enjoyment without worrying about hitting the big time will be well suited to Fa Fa Twins. 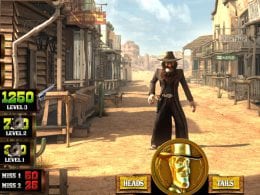 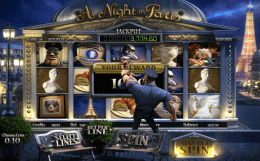 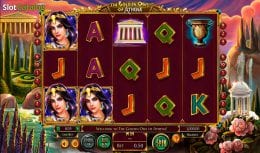 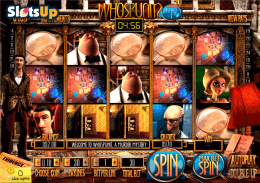